Kennedy participated in her first gymnastics exhibition over the weekend. It was a show-off program for all the younger gymnasts. She had been counting down the days for weeks…gymnastics is one of her favorite things to do!

Sitting was limited, so my pictures aren’t great, but I managed to snap a couple. We are so proud of our five year old gymnast! On the way home she asked, “where were the judges?” 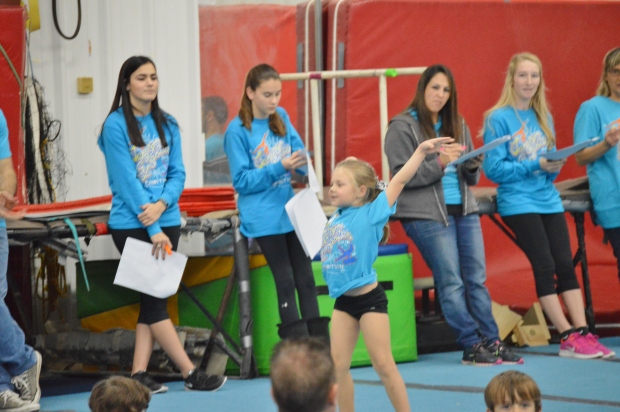 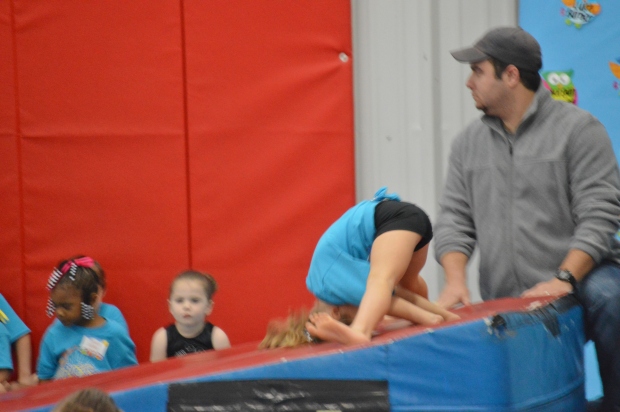 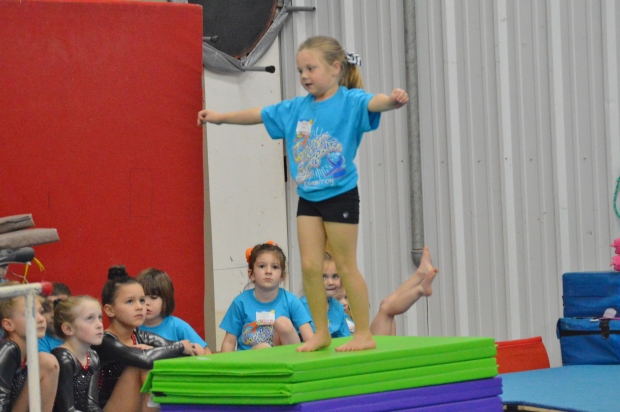 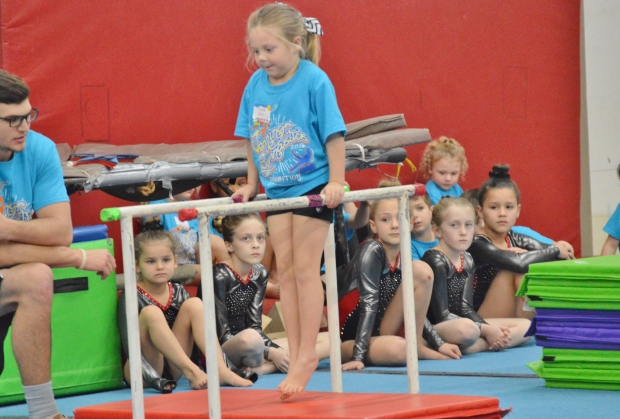 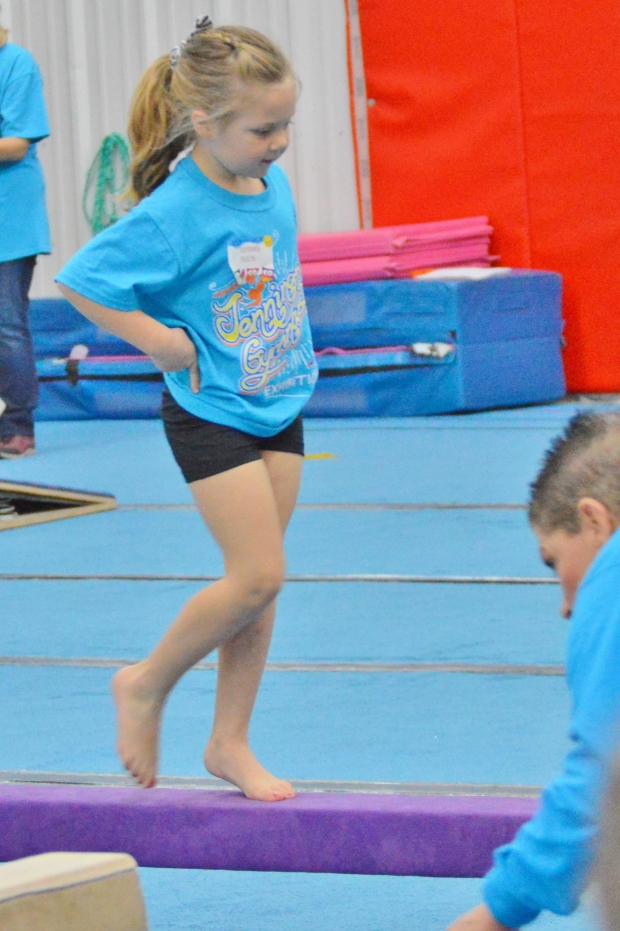 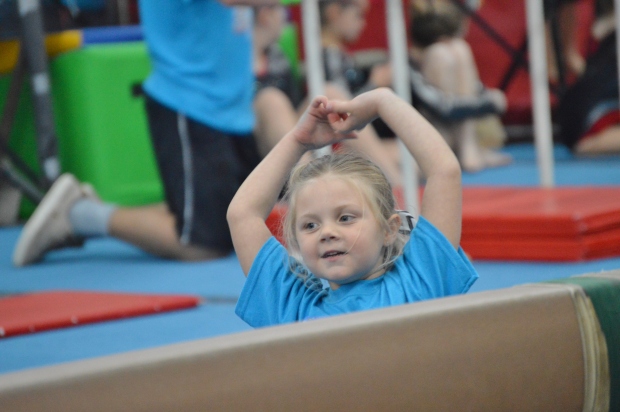 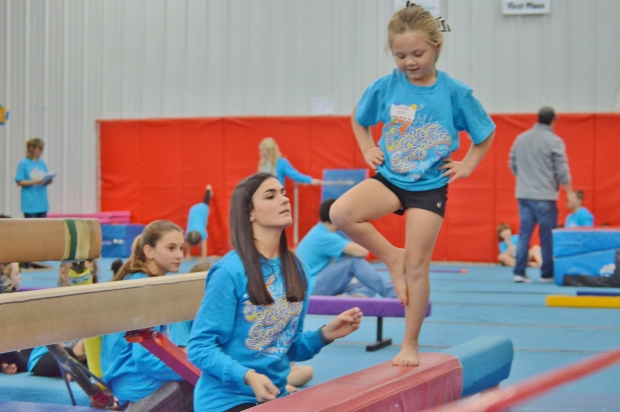 Ahhhh, the trophy! She was SO proud of this trophy, the minute we got home she went display it on her nightstand. 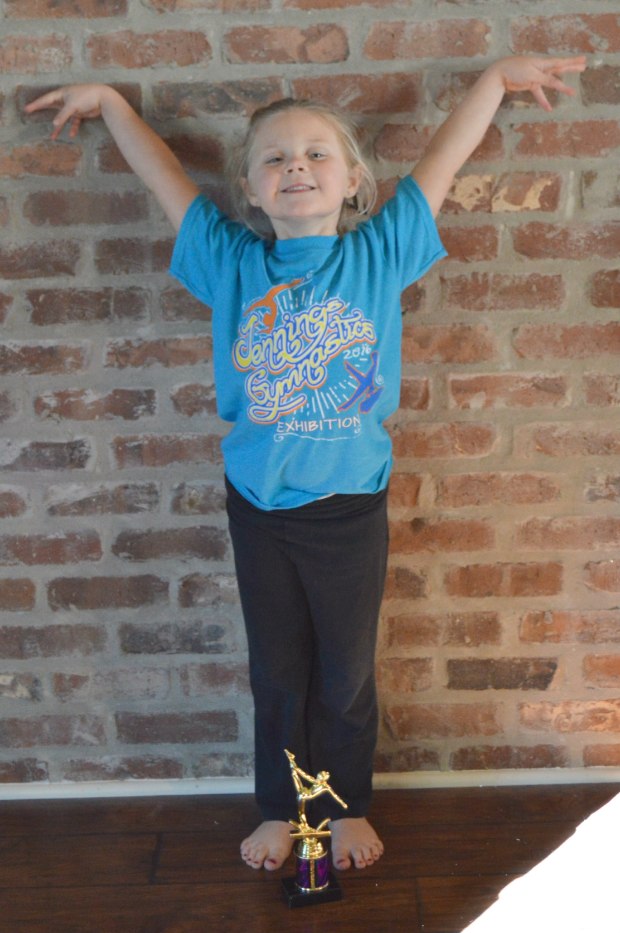 Way to go Kennedy…you got a perfect 10 from us ;) Keep it up baby girl.

With Valentine’s Day approaching, I thought it would be appropriate to take some photos of the love in the house. Kennedy and Jules absolutely ADORE Easton. Sometime a little too much…They always want to kiss him, hug him, hold him, give him toys, etc. He serves as their real life baby doll.

You would think he would get aggravated (and sometimes he does), but the majority of the time, he LOVES how much they LOVE him! He laughs at them, and enjoys just watching them play. I’m savoring these moments, because I know the sibling rivalry will emerge soon enough!

I thought this little photo shoot captured these moments perfectly. The girls had the time of their lives putting on lipstick and smooching all over Easton. He had some big belly laughs during these pictures. I’ll have to agree with him….I think his sisters are pretty funny too :) 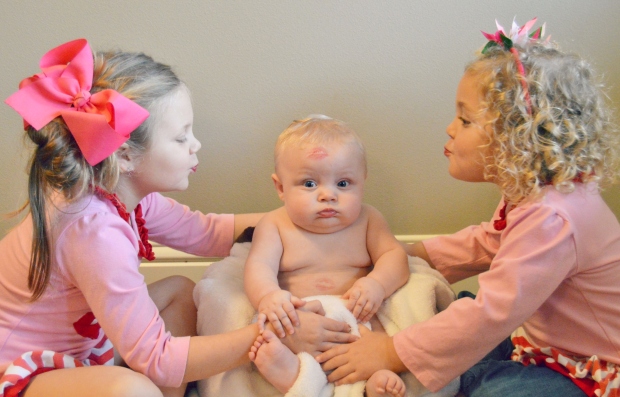 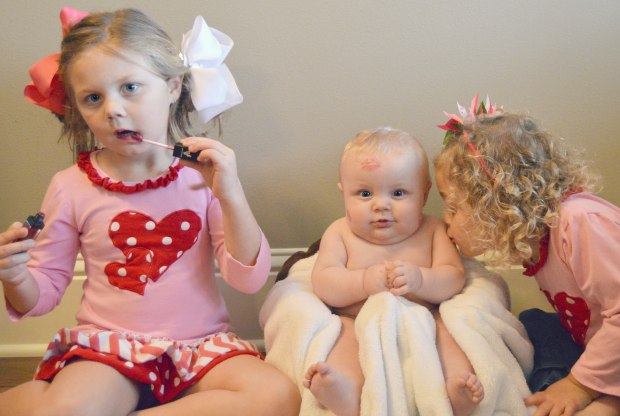 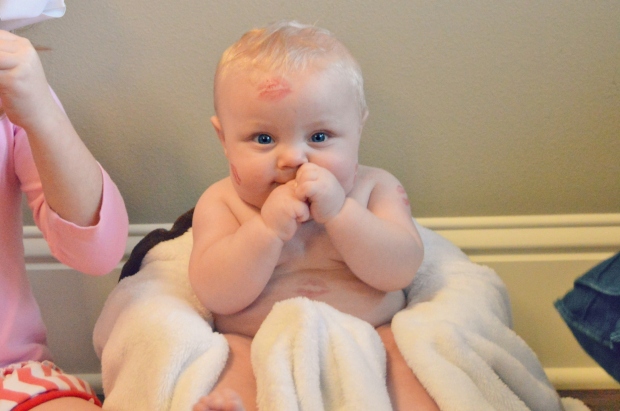 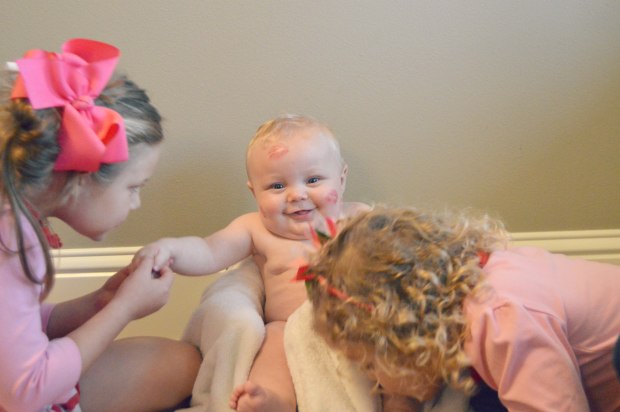 Better late than never, right? Finding time to upload these pictures has been a challenge! Between Christmas festivities, keeping up with the house, and a sick pup, we have been busy to say the least.

We started off our Christmas celebrations with a pajama party at Nana & Grampi’s house days before Christmas. Kennedy received more ShopKinz than she can count, Jules got some fun princess toys, and Easton scored the most precious baseball rocker. 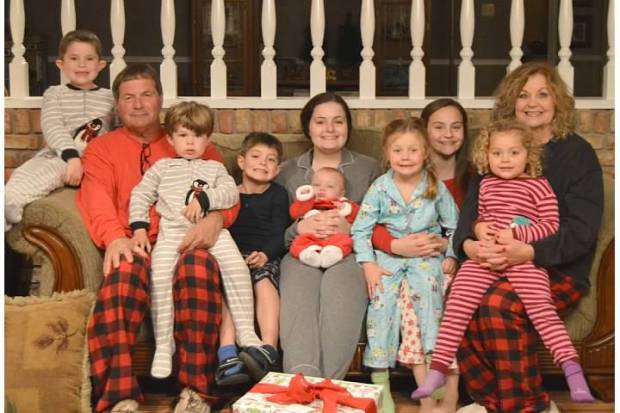 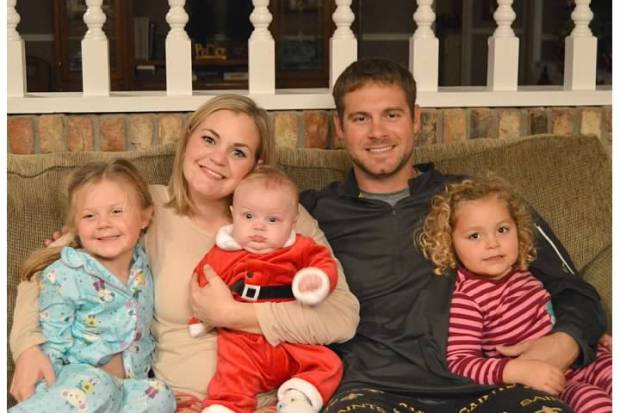 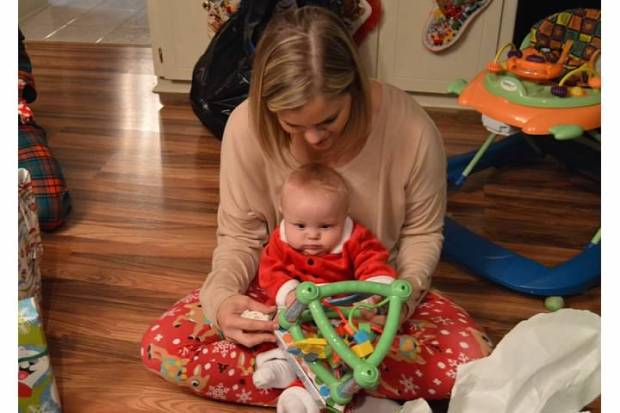 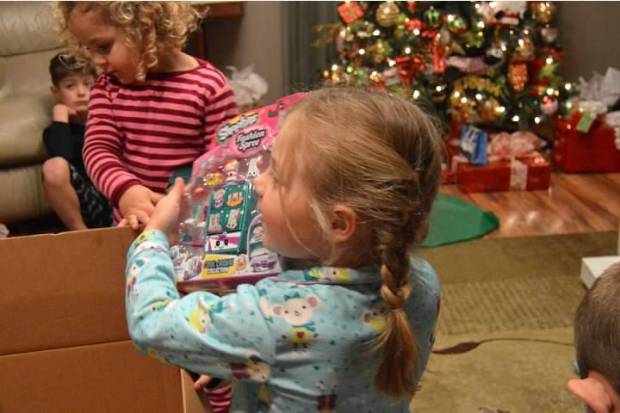 Christmas Eve was celebrated at Maw & Pappy’s with their cousins Layla and Landen. They were excited to make a gingerbread house with Pappy! The girls received Easy-Riders (riding toy), and Easton racked up on more baby toys. He is so happy he doesn’t have to play with princess toys anymore :)

We ended the night by leaving cookies and milk for Santa! So exciting!

The only thing Kennedy asked for was the Inside Out DVD. Jules asked for a Rainbow Dash Play Doh Set. Santa threw in some extras such as Toy Story characters, mermaid tails, a karaoke machine, and a activity car for Easton. However, Easton’s first ride in his car didn’t go too well…he fell right out! Santa even brought Harley a surprise! 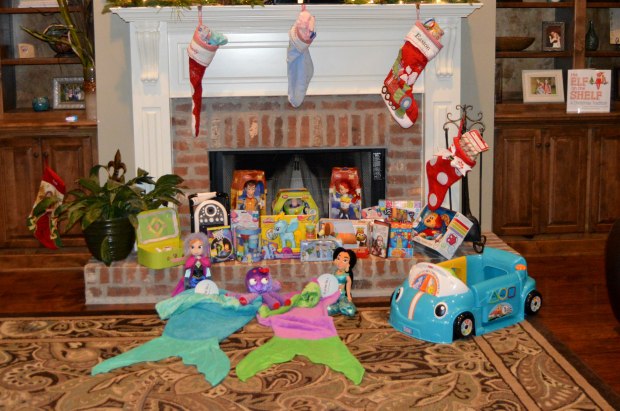 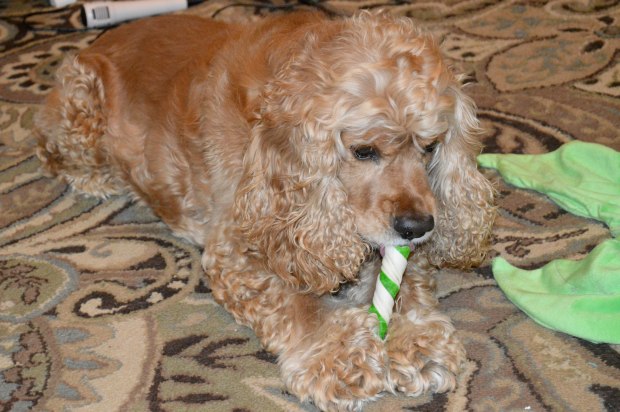 We spent the first a half of Christmas day at Nana’s where the kids sang Happy  Birthday to Jesus. The second half of the day was spent at Maw’s where they finished the day with a game of twister, and eating that yummy gingerbread house they made. We had a wonderful holiday surrounded by our favorite people :) 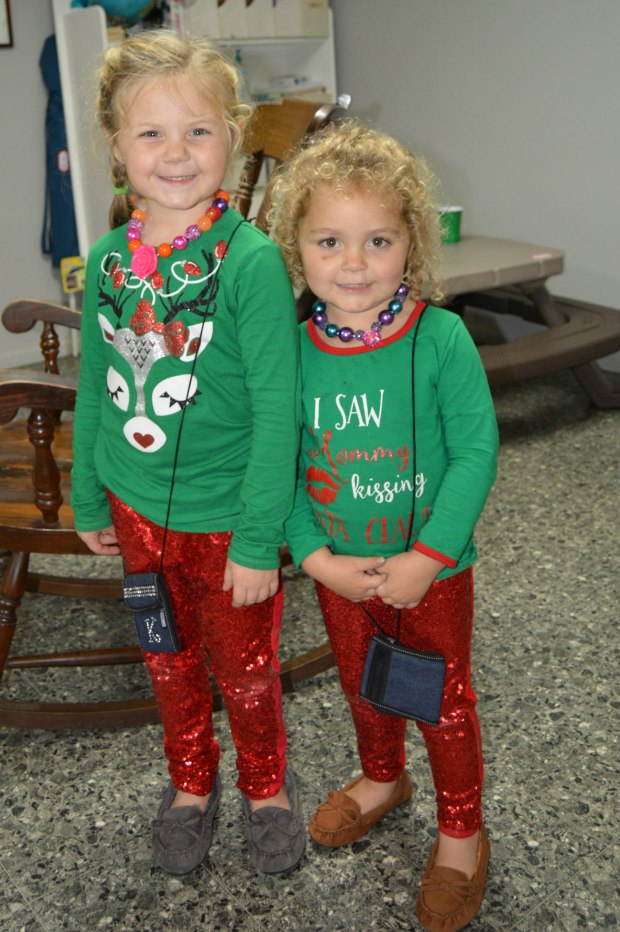